The capitalist class and its ideologues – ‘hard’ and ‘soft’ power

Hitler with bust of Nietzsche

In What Direction Is Empirio-criticism Developing?

We judge a person not by what he says or thinks of himself but by his actions. And we must judge philosophers not by the labels they give themselves (“positivism”, the philosophy of “pure experience”, “monism” or “empirio-monism”, the “philosophy of natural science”, etc.) but by how they actually settle fundamental theoretical questions, by their associates, by what they are teaching and by what they have taught their disciples and followers.

The ‘fundamental theoretical question’ that Lenin unceasingly drove at in Materialism and Empirio-criticism, which underlies all other questions, is ‘Which takes precedence over or which is the product of the other – objective reality (matter) or consciousness/thought?

Heidegger, middle of 2nd row, on his way to give his first address as Rektor of the University of Freiburg, 27.05.33. He joined the Nazi party on the 1st of May. 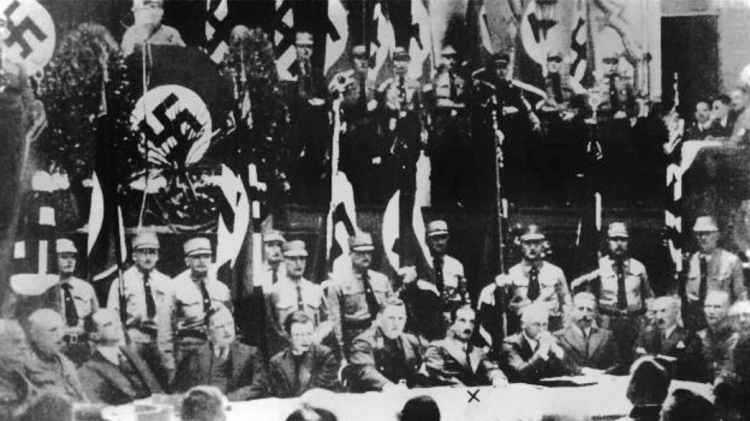 Heidegger (indicated by a cross), in his capacity as Rektor of the University of Freiburg, at a public demonstration of support for Nazism by German professors on 11.11.33 in Leipzig.