Two years ago, a lengthy Financial Times essay predicted that the discovery of some disturbing colonial-era photographs would signal the imminent end of “colonial nostalgia.”

Unearthed in what was once the Dutch East Indies and is now Indonesia, they included many “timeless” images associated with the bygone days of empire; young girls in flowing white dresses, men riding elephants, women tending out-of-place flower gardens.

But alongside these representations of “lost white paradise,” were gruesome pictures of colonialism’s less pleasant side. In one, Dutch soldiers smile for the camera shortly after gunning down an entire village. Dead bodies are clearly visible in the frame.

Europeans (and Australians) have long regarded colonialism with romanticism. But images such as these meant the “western emotional memory of colonialism is [finally] changing”, wrote Simon Kuper in the Financial Times essay.

As it turns out, Kuper’s optimism was premature. Colonial nostalgia is back and Taylor Swift is the latest artist to immortalise it in her new video ‘Wildest Dreams’, where she plays a glamorous Old Hollywood movie star falling for her (married) leading man on location in Africa.

‘Wildest Dreams’ is a homage to old films like ‘African Queen’, which were themselves a love letter to colonialism. As such, while there are lions and giraffes aplenty, there is little room for black people. Unsurprisingly, many Africans are unimpressed. Writing for NPR, James Kassaga Arinaitwe and Viviane Rutabingwa explain why:

“(Swift) should absolutely be able to use any location as a backdrop. But she packages our continent as the backdrop for her romantic songs devoid of any African person or storyline, and she sets the video in a time when the people depicted by Swift and her co-stars killed, dehumanised and traumatised millions of Africans.”

The video’s director, Joseph Kahn, who pointed out the multi-racial makeup of the video’s crew, said he limited the number of black extras for purposes of historical accuracy. “This is not a video about colonialism,” he protested.

Translation: this is not a video intentionally about colonialism. Nonetheless, Kahn has “accidentally” perpetuated the colonial interpretation of Africa as nothing more than a dry landscape of magnificent animals and dramatic sunsets. It’s not so much that there aren’t enough black people in it, it’s that they’re regarded as utterly inconsequential.

Local populations don’t have to be omitted entirely for colonial nostalgia to be in effect. The 2013 Sports Illustrated swimsuit edition, consisting of mostly white models in exotic locales, did include people of colour but they were used interchangeably with animals and landscapes. One model poses with a spear-wielding African man, another reclines on a raft while being chauffeured by a Chinese peasant.

It’s as if people of colour serve no role other than to highlight the individuality of westerners. Whiteness is centralised and the colonial myth lives on: that colonialism was really not so bad after all, and that it had the blessings of locals who did little more than stand around in colourful costumes smiling beatifically.

This is the power of colonial nostalgia – it has allowed the west to completely reimagine its own history. When the truth is too inconvenient, it is simply ignored.

‘Banished’, a BBC mini-series about the First Fleet that screened earlier this year famously included not a single Aboriginal person. Producer Jimmy McGovern claimed it would have been too difficult to get the portrayal of Aboriginal people right given the two-week timeframe of the series. 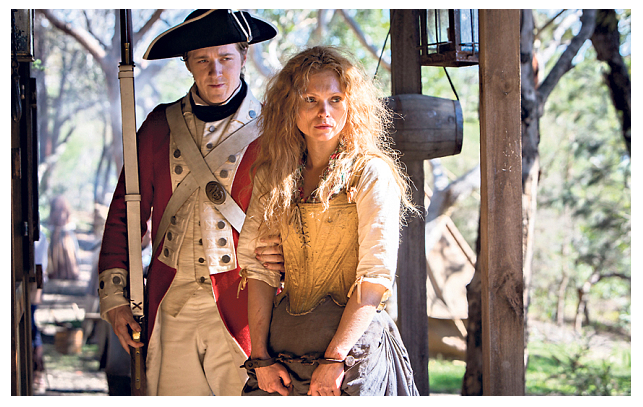 Translation: Aboriginal people had to be left out because including them would mean telling a completely different story – not one of unlucky convicts and plucky explorers braving the treacherous ocean to find “nothing but bush” on the other end, but one of Aboriginal resistance and the beginnings of genocide.

Of course, it’s not surprising that artists neglect to portray the full truth of colonialism. They take their cues from a society that has, in general, proven to be nothing if not adept at absolving itself of any need for truthful recollection of its own brutal history.

Winston Churchill, who once said that Arabs have no more claim to land in Palestine than dogs, and who presided over some shocking atrocities in the colonies, has somehow been recast as a loveable old bear who went to war “for the arts.” Lachlan Macquarie, NSW’s fifth governor who has a city street named after him, is remembered as a great “colony builder.” He was reasonably nice to Aboriginal people – as long as they didn’t show any inclination to independence. This is what happened when they did:

“In 1816 Macquarie’s paternalism was tested when hostile Aboriginal people attacked settlers along the Hawkesbury–Nepean River. His reluctant response was to send a punitive military expedition with orders to take as many prisoners as possible, shoot any who resisted or attempted to flee and hang their bodies in the trees as a warning to survivors.”

This is the reality that white colonial nostalgia obscures. Whether or not Swift, or Sports Illustrated, or the BBC intended to glorify colonialism, that’s exactly what they’ve done. Massacres, exploitation, and enslavement were not unfortunate by-products of colonialism – they were its modus operandi and what made the western world as we know it possible.

This uncomfortable truth must be reckoned with if we are to have any hope of putting the past behind us. You cannot isolate the “good parts” of colonialism from the brutality, and then expect people of colour to accept this romanticisation of a period in history whose impacts we are still reeling from. Not in your wildest dreams.