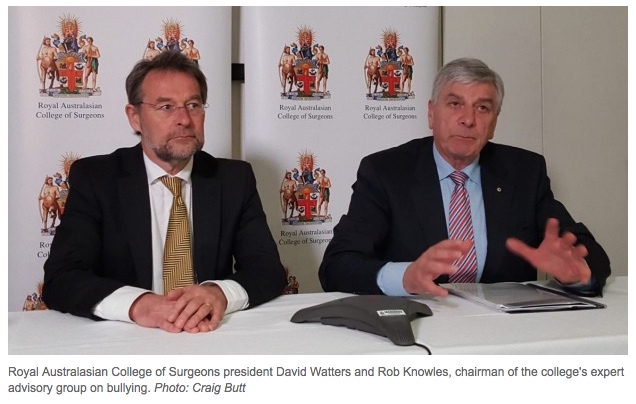 Bullying, discrimination and sexual harassment are rife in the surgical profession, a damning report has found.

Half the surgeons and trainees who responded said they had been victimised.

Six months after senior surgeon Gabrielle McMullin said junior women doctors should “comply with requests” for sex to protect their medical careers, an independent survey of more than 3500 surgeons commissioned by the Royal Australasian College of Surgeons has revealed a “toxic culture” in surgery departments across Australia.

Although about three out of five registered trainees surveyed said they’d been bullied, making complaints was widely believed to be “career suicide”.

Sexism was entrenched and endemic and sexual harassment pervasive, with women reporting they felt powerless to protest.

Women reported much higher rates of victimisation than men. One in three of the 560 women surveyed reported they’d been sexually harassed.

Sexual propositions and innuendo were the most common forms of sexual harassment.

Women trainees and junior surgeons reported feeling obliged to give their supervisors sexual favours to keep their jobs. One woman reported that she had to “provide sexual favours in [her supervisor’s] consulting rooms in return for tutorship”.

Several women told the inquiry they felt “vulnerable and powerless when propositioned by senior male surgeons,” the report said.

“There are stories of acceptance at the time, as a ‘necessary evil’ with subsequent feelings of regret and shame. The impact of the sexual harassment was varied, ranging from annoyance at having to deal with it to utter despair and feelings of worthlessness.”

This follows reports from more than a dozen female doctors who contacted Fairfax Media in March to back Dr McMullin’s assertion that sexual harassment was widespread.

Dr McMullin has said that the career of Melbourne neurosurgeon Caroline Tan had been ruined by a sexual harassment case she won against a fellow neurosurgeon in 2008, and that “realistically” she would have been better off giving the man “a blow job”.

The report found a culture of fear and reprisal, with known bullies in senior positions seen as untouchable and too valuable for hospitals to discipline.

“This appears to be the single biggest issue fostering continuing poor behaviour by perpetrators, as so few people are prepared to challenge the status quo,” the report states.

“I was told I would only be considered for a job if I had my tubes tied,” one reported. Others said they were made to work 30-hour shifts while heavily pregnant, or told to “pay back” their maternity leave by “doing all the on-call roster”.

Surgical departments were described as “boy’s clubs” with “institutional sexism on every level”.

Senior surgeons and supervisors regularly expressed doubts that women should be surgeons, and should instead “fetch the groceries”.

The college’s president David Watters said the results were “shocking” and apologised to all those who had been bullied.

“I am sorry too many of us have been silent bystanders,” Professor Watters said. “This silence has been part of the problem. We have failed to push back against the behaviour of those responsible and we should have done more to support those who had been affected.”

Like the police force and the army, the Royal Australasian College of Surgeons had to face up to the problem now that an independent inquiry had unearthed the true extent of the bullying and harassment, said the advisory group’s chairman Rob Knowles.

Stamping out bullying and harassment required the cooperation of the hospitals, said Mr Knowles. He flagged that the worst offenders could be removed from senior positions in surgical departments if conditions did not improve.

The draft report recommends cultural change and leadership among surgeons, better approaches to educating trainees, and better management of complaints about bullying.

The college is seeking feedback before the final report is handed down, and will produce an action plan to tackle bullying by the end of November.