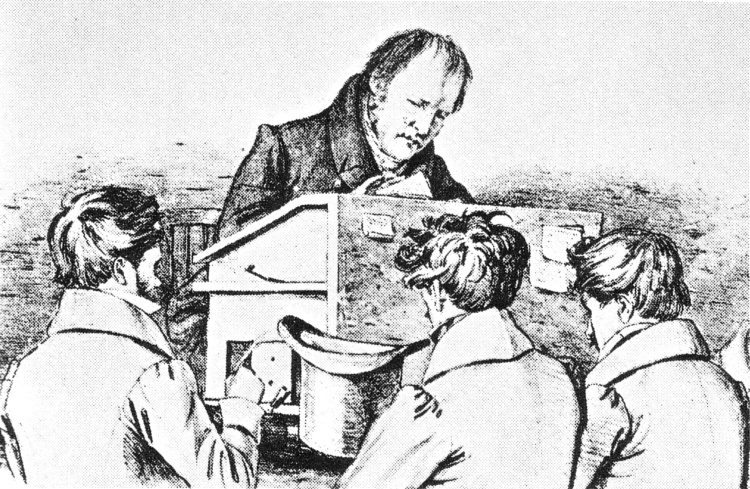 Hegel with his Berlin students, Sketch by Franz Kugler

A. By plagiarising Plotinus.

‘Consider sense-knowledge: its objects seem most patently certified, yet the doubt returns whether the apparent reality may not lie in the states of the percipient rather than in the material before him; the decision demands intelligence or reasoning. Besides, even granting that what the senses grasp is really contained in the objects, none the less what is thus known by the senses is an image: sense can never grasp the thing itself; this remains forever outside.

…The only way to this is to leave nothing outside of the veritable Intellectual-Principle which thus has knowledge in the true knowing (that of identification with the object), cannot forget, need not go wandering in search. At once truth is there, this is the seat of the authentic Existents, it becomes living and intellective: these are the essentials of that most lofty Principle; and failing them where is its worth, its grandeur?

…Thus veritable truth is not accordance with an external; it is self-accordance; it affirms nothing other than itself and is nothing other; it is at once existence and self-affirmation.’

14 thoughts on “Q: How did Hegel overcome Kant’s phenomenal/noumenal dilemma?”