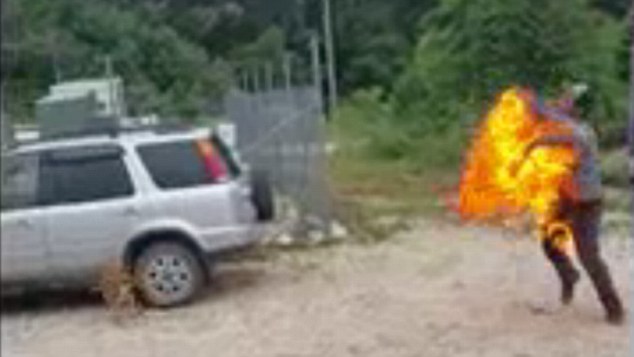 Iranian refugee Omid Masoumali died having set himself on fire after UNHCR told him he would remain on Nauru. He had been on the island for three years and was requesting to be sent to a third country.

Tim Dick, ‘Australia is a bad neighbour and we should be better than this,’ The Sydney Morning Herald 01.05.16

If there were a neighbourhood watch group in this part of the world, Australia would be the neighbour the group had to watch. It is rich and large, rude and loud, and doesn’t seem to care that its behaviour brings the region down.

Our government has managed to infuriate most nearby countries in some way or other. Some have to deal with the consequences of our peculiar, unjustified obsessions with refugees and dole bludgers. One, the youngest, smallest and poorest nation in Asia, has to cop rampant Australian greed for its mineral wealth.

Australia has behaved scandalously towards East Timor. It behaves selfishly towards New Zealand. Highhandedly towards its former colony, Papua New Guinea. It acts towards tiny Nauru as if it is a shameful illegitimate child, to be paid off to do our dirty work, running a refugee gulag hidden from view.

The rendition of innocent asylum seekers, guilty of nothing more than choosing the wrong country to ask for help, has erupted during the phoney election campaign only because the PNG opposition leader had the fortitude to sue for their freedom.

The PNG Supreme Court merely had to point to its constitutional guarantee that no person shall be unlawfully deprived of liberty to order them freed, a guarantee Australia’s constitution does not provide. The forceful bringing into and detention of the asylum seekers on Manus Island was unconstitutional, it found, and therefore illegal.

As it should be. Australia did not merely turn these innocents asking for help away; it picked them up and banished them, forcibly imprisoned in a country they did not try to enter.

We paid handsomely for this immorality, increasing spending reinforcing our fortress while cutting our meagre foreign aid. We even paid for the PNG government’s doomed defence, one of an appalling scheme in which a processing centre did little processing, and incalculable damage to the unfortunate souls locked behind razor wire, to PNG’s reputation, and to what should be Australia’s good name.

The Turnbull government takes the view, contrary to all facts and any reason, that the fate of the unlawfully imprisoned is the responsibility of Papua New Guinea. That is as self-evidently wrong as setting up the Manus Island version of Guantanamo Bay in the first place, with indefinite incarceration of hundreds somehow justified by the legitimate aim of stopping too many deaths of those who come by sea.

The name of Nauru, which after Manus closes will be our remaining client state, is so thoroughly besmirched as a prison island as Napoleon’s Elba, although at least the crafty emperor had enough support to break him out. Only setting yourself alight gets you off the Pacific’s phosphate prison. All on Australia’s watch.

Towards East Timor, we behave with appalling greed. Rather than renegotiating the manifestly unfair boundary between us – one that gives one of the world’s richest countries more of the vast mineral wealth which should belong to one of the poorest – we refuse to budge.

We even pulled out of an international scheme to settle boundaries two months after East Timor’s independence. The Howard government sent in the spies to ensure our smallest neighbour did not get what it deserved.

The boundary should run along the median point, like most boundaries do when the exclusive economic zones overlap, but that would divert the wealth to a country that needs it more. Australia couldn’t have that, so East Timor is forced to try obscure parts of the UN to pressure it towards common decency.

Even towards supposedly close New Zealand, which puts the NZ in Anzac, we behave boorishly.

Australia and New Zealand have long agreed to allow the people of each country to live in the other, but Australia has reneged on part of the deal by allowing the Kiwi dole-bludger myth to dictate policy.

Australia now treats arriving New Zealanders as guest workers to be tolerated and taxed, but to be excluded from such luxuries as the disability insurance scheme for which they have to pay.

Then it exports those criminals imprisoned for a year with New Zealand citizenship, no matter how much a product of Australia they might be. Far too many have been deported for NZ to deal with who moved to Australia even before their first day of school. How it is fair to expect the Kiwis to rehabilitate Australian crooks is never explained. Australia can do it, so it does.

It is difficult to underestimate the ill feeling this creates in New Zealand, yet most Australians are oblivious to it and the government entirely shameless about it.

In contrast, Australians who move to New Zealand can vote after living there for two years. If they are without work, they get welfare. If they are injured, they are looked after by the national no-fault compensation scheme.

Australia should be better than all of this. Australians certainly are, in the main, a caring and thoughtful bunch, far more decent than the likes of Peter Dutton make us appear.

But without a serious attitude adjustment, to one that respects the neighbours rather than being callously indifferent to them, Australia’s reputation will remain sullied for no justifiable end.

When you put the above article against the pride in servility of Australians first to the interests of British and now U.S. capital (from the skirts of Mother Britannia to the coat-tails of Uncle Sam), you begin to get a sense of the depth of hypocrisy, sickness and rapidly increasing meanness in Australian culture.