Sam Dastyari had been in the Senate mere months when a ghost from his past came back to haunt him. He was sued by a marketing company over work it said he had commissioned and then abandoned while general secretary of the NSW Labor Party.

He settled the case for around $5000, but rather than pay it himself or get the Labor Party to help, he sent the bill to the Yuhu Group, reporting its support in the register of senators’ interests.

The Shenzhen Yuhu investment development group was founded by Huang Xiangmo, a Chinese-Australian billionaire to whom $5000 was literally small change.

A few months earlier he had given $1.8 million to the University of Technology in Sydney to help establish an Australia-China Relations Institute, which supplanted an existing China Research Centre whose publications had at times been critical of China.

It emails journalists offering all expenses paid trips to China (“flights, accommodation, meals and internal transport”) and, in an unusual approach for a university body, describes itself as taking a “positive and optimistic view” of the Australia-China relationship.

Click the “research” button on its website and you won’t see research, but “fact sheets” urging Australia to approve the Australia-China free trade agreement, not to run freedom of navigation exercises in the South China Sea and not to block the takeover bid for an electricity network.

Huang chairs the Institute himself, or so he says, in another departure from normal practice. He says he personally chose Australia’s former foreign minister Bob Carr to run it.

John Fitzgerald, a China specialist who directs philanthropy studies at Swinburne University, says it is the clearest departure from accepted university practice he has seen. Other research centres, such as those part-funded by the United States, critically examine what’s happening in the US. Another academic familiar with the Institute who teaches in China says there is more questioning of the Chinese regime among his own Chinese students than there is at the University of Technology, which seems to be the way Huang wants it. A prodigious donor to both sides of Australian politics, he wrote in a Chinese newspaper last week that donors needed to learn how to have, “a more efficient combination between political requests and political donations, and how to use the media to push our political requests”. 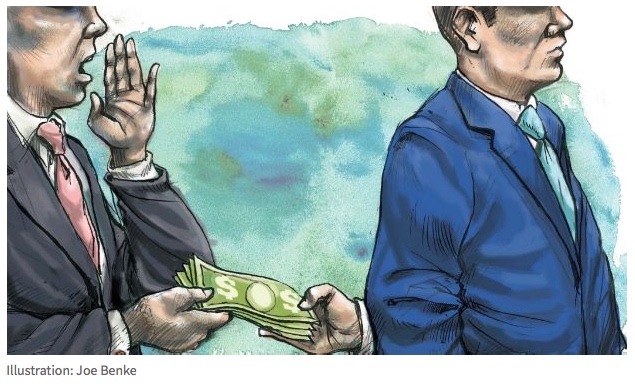 Huang sees donations as transactional. But the transactions aren’t always in Australia. In China, where some of his associates have been under a cloud, giving money to Australian universities and politicians is seen as a way to do the right thing by Chinese officials. China has set up “Confucius Institutes” at 10 Australian universities including the University of Melbourne with the aim of promoting “Chinese language and culture in a friendly, accessible and educational way”. They are also in high schools, 35 of them according to the former education minister Christopher Pyne.

To the Chinese Communist Party they are “an important part of China’s overseas propaganda set-up”. To Australian schools desperate for funds, they are a way to get teaching resources cheaply. 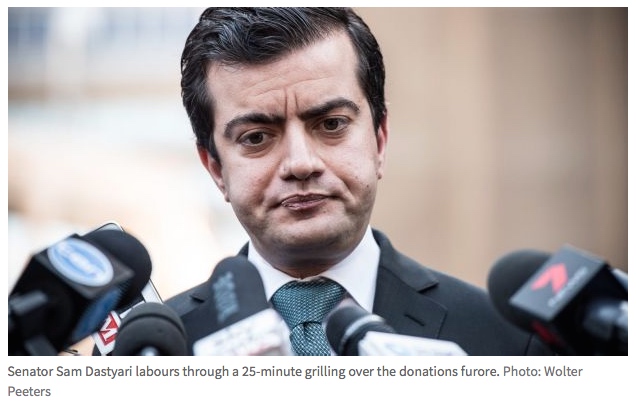 The Communist Party itself has ultimate control over their curriculum, budget and hiring and training of staff, according to a Parliamentary Library research note, creating “extra-territoriality” within Australian universities and schools.

In Canada the Association of University Teachers has urged universities to sever their ties with Confucius Institutes. In the US, the Association of University Professors has issued a report suggesting their governance arrangements are “inconsistent with principles of academic freedom”, and at Chicago University the university senate has voted against renewing the institute’s contract after receiving a petition from 100 staff complaining that an outside entity was “in effect seriously influencing who’s teaching and what’s taught under our name”.

But here we don’t seem to care as much, perhaps because, like Sam Dastyari, we believe we can take money without being expected to give anything back in return. That isn’t how it’s seen in China, that’s not how it’s seen by donors such as Huang, and it’s not what the research shows. Yes: there is economic research into our response to gifts.

Oddly, and disturbingly for recipients such as Dastyari, it finds that small gifts can pack a bigger

punch than big ones. For their study entitled You Owe Me, Ulrike Malmendier and Klaus Schmidt allowed bidders to give gifts to students deciding which firms to award contracts to in a laboratory experiment. The games weren’t repeated, so there was no chance of ever encountering the gift-givers again. Yet the small gifts won them over, even when what the bidders were offering was a worse service. As the size of the gift grew the effect faded.

They explain their findings by saying gifts “create a special bond between the gift giver and the receiver”. The more obvious the attempt, the more our guard goes up. It’s why doctors surgeries are filled with branded pens and free samples rather than wads of cash.

But there’s a caveat. Experienced China watchers say the gift needs to be just big enough to create a slight feeling of unease. Once the recipient feels they might have transgressed, they’re hooked for next time.

The sort of speaking that resulted in so much political heat for Dastyari:

What a US peppercorn buys in Australia:

At a ceremony in 1967 the US ambassador to Australia Ed Clark laughingly paid the Australian Prime Minister Harold Holt a peppercorn for a year’s rent on their spy base at North West Cape in Western Australia. The lease did not allow Australia any degree of control over the station.

2 thoughts on “What it means to be Australian”