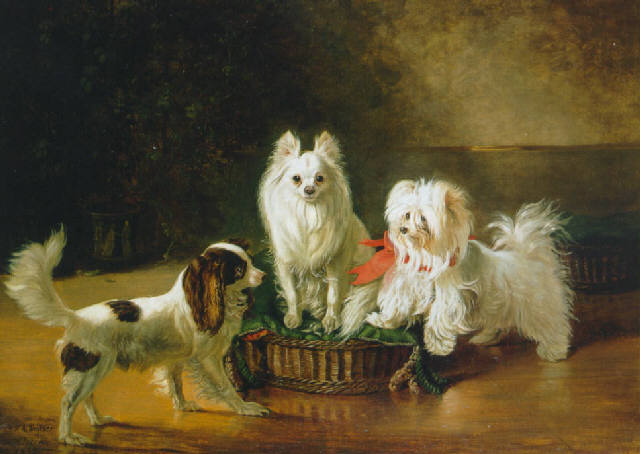 A toy Spaniel, a dwarf Spitz and a Maltese next to a basket (1855), Johann Friedrich Wilhelm Wegener

The form of development of natural science, in so far as it thinks, is the hypothesis. A new fact is observed which makes impossible the previous method of explaining the facts belonging to the same group. From this moment onwards new methods of explanation are required – at first based on only a limited number of facts and observations. Further observational material weeds out these hypotheses, doing away with some and correcting others, until finally the law is established in a pure form. If one should wait until the material for a law was in a pure form, it would mean suspending the process of thought in investigation until then and, if only for this reason, the law would never come into being.

The number and succession of hypotheses supplanting one another – given the lack of logical and dialectical education among natural scientists – easily gives rise to the idea that we cannot know the essence of things (Haller and Goethe). This is not peculiar to natural science since all human knowledge develops in a much twisted curve; and in the historical sciences also, including philosophy, theories displace one another, from which, however, nobody concludes that formal logic, for instance, is nonsense.

The last form of this outlook is the ‘thing-in-itself’. In the first place, this assertion that we cannot know the thing-in-itself (Hegel, Encyclopaedia, paragraph 44) passes out of the realm of science into that of fantasy. Secondly, it does not add a word to our scientific knowledge, for if we cannot occupy ourselves with things, they do not exist for us. And, thirdly, it is a mere phrase and is never applied. Taken in the abstract it sounds quite sensible. But suppose one applies it. What would one think of a zoologist who said: ‘A dog seems to have four legs, but we do not know whether in reality it has four million legs or none at all’? Or of a mathematician who first of all defines a triangle as having three sides, and then declares that he does not know whether it might not have 25? That 2×2 seems to be 4? But scientists take care not to apply the phrase about the thing-in-itself in natural science, they permit themselves this only in passing into philosophy. This is the best proof how little seriously they take it and what little value it has itself. If they did take it seriously, what would be the good of investigating anything?

Taken historically the thing would have a certain meaning: we can only know under the conditions of our epoch and as far as these allow.