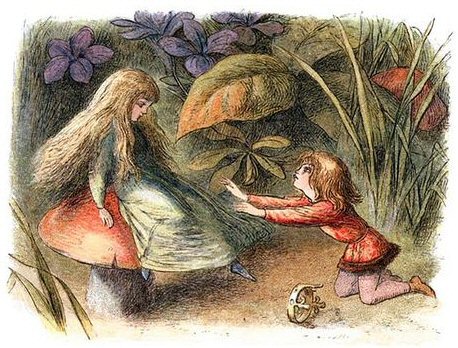 The prince thanking the Water sprite (artist: Richard ‘Dickie’ Doyle), from The Princess Nobody: A Tale of Fairyland (1884) by Andrew Lang

The Machists love to declaim that they are philosophers who completely trust the evidence of our sense-organs, who regard the world as actually being what it seems to us to be, full of sounds, colours, etc., whereas to the materialists, they say, the world is dead, devoid of sound and colour, and in its reality different from what it seems to be, and so forth. Such declamations, for example, are indulged in by J. Petzoldt, both in his Introduction to the Philosophy of Pure Experience and in his World Problem from the Positivist Standpoint (Weltproblem von positivistischen Standpunkte aus), 1906. Petzoldt is parroted by Mr. Victor Chernov, who waxes enthusiastic over the “new” idea. But, in fact, the Machists are subjectivists and agnostics, for they do not sufficiently trust the evidence of our sense-organs and are inconsistent in their sensationalism. They do not recognise objective reality, independent of man, as the source of our sensations. They do not regard sensations as a true copy of this objective reality, thereby coming into direct conflict with natural science and throwing the door open for fideism. On the contrary, for the materialist the world is richer, livelier, more varied than it seems, for with each step in the development of science new aspects are discovered. For the materialist, our sensations are images of the sole and ultimate objective reality, ultimate not in the sense that it has already been cognised to the end, but in the sense that there is not and cannot be any other. This view irrevocably closes the door not only to every species of fideism, but also to that professorial scholasticism which, while not recognising an objective reality as the source of our sensations, “deduces” the concept of the objective by means of such artificial verbal constructions as universal significance, socially-organised, and so on and so forth, and which is unable, and frequently unwilling, to separate objective truth from belief in sprites and hobgoblins.

The Machists contemptuously shrug their shoulders at the “antiquated” views of the “dogmatists”, the materialists, who still cling to the concept matter, which supposedly has been refuted by “recent science” and “recent positivism.” We shall speak separately of the new theories of physics on the structure of matter. But it is absolutely unpardonable to confuse, as the Machists do, any particular theory of the structure of matter with the epistemological category, to confuse the problem of the new properties of new aspects of matter (electrons, for example) with the old problem of the theory of knowledge, with the problem of the sources of our knowledge, the existence of objective truth, etc. Mach “discovered the world-elements”: red, green, hard, soft, loud, long, etc. We ask, is a man given objective reality when he sees something red or feels something hard, etc., or not? This hoary philosophical query is confused by Mach. If you hold that it is not given, you, together with Mach, inevitably sink to subjectivism and agnosticism and deservedly fall into the embrace of the immanentists, i.e., the philosophical Menshikovs. If you hold that it is given, a philosophical concept is needed for this objective reality, and this concept has been worked out long, long ago. This concept is matter. Matter is a philosophical category denoting the objective reality which is given to man by his sensations, and which is copied, photographed and reflected by our sensations, while existing independently of them. Therefore, to say that such a concept can become “antiquated” is childish talk, a senseless repetition of the arguments of fashionable reactionary philosophy. Could the struggle between materialism and idealism, the struggle between the tendencies or lines of Plato and Democritus in philosophy, the struggle between religion and science, the denial of objective truth and its assertion, the struggle between the adherents of supersensible knowledge and its adversaries, have become antiquated during the two thousand years of the development of philosophy?

6 thoughts on “Lenin: Is there objective truth? Part three”