From the NASA page: ‘even though this illustration has appeared in numerous places over the past 100 years, the actual artist remains unknown. Furthermore, the work has no accepted name…The illustration, first appearing in a book by Camille Flammarion in 1888, is used frequently to show that humanity’s present concepts are susceptible to being supplanted by greater truths.’

‘Let us then apprehend in our thought this visible universe, with each of its parts remaining what it is without confusion, gathering all of them together into one as far as we can, so that when any one part appears first, for instance the outside heavenly sphere, the imagination of the sun and, with it, the other heavenly bodies follows immediately, and the earth and sea and all the living creatures are seen, as they could in fact all be seen inside a transparent sphere. Let there be, then, in the soul a shining imagination of a sphere, having everything within it, either moving or standing still, or some things moving and others standing still. Keep this, and apprehend in your mind another, taking away the mass: take away also the places, and the mental picture of matter in yourself, and do not try to apprehend another sphere smaller in mass than the original one, but calling on the god who made that of which you have the mental picture, pray him to come. And may he come, bringing his own universe with him, with all the gods within him, he who is one and all, and each god is all the gods coming together into one; they are different in their powers, but by that one manifold power they are all one; or rather, the one god is all; for he does not fail if all become what he is; they are all together and each one again apart in a position without separation, possessing no perceptible shape – for if they did, one would be in one place and one in another, and each would no longer be all in himself…nor is each whole like a power cut up which is as large as the measure of its parts. But this, the [intelligible] All, is universal power, extending to infinity and powerful to infinity; and that god is so great that his parts have become infinite…’

Imagine the bitter lot of a Machist when his favourite subtle constructions, which reduce the categories of natural science to mere working hypotheses, are laughed at by the scientists on both sides of the ocean as sheer nonsense! Is it to be wondered at that Rudolf Willy, in 1905, combats Democritus as though he were a living enemy, thereby providing an excellent illustration of the partisan character of philosophy and once more exposing the real position he himself takes up in this partisan struggle? He writes: “Of course, Democritus was not conscious of the fact that atoms and the void are only fictitious concepts which perform mere accessory services (blosse Handlangerdienste), and maintain their existence only by grace of expediency, just as long as they prove useful. Democritus was not free enough for this; but neither are our modern natural scientists, with few exceptions. The faith of old Democritus is the also the faith of our natural scientists” (op. cit., S. 57).

And there is good reason for despair! The “empirio-criticists” have proved in quite a “new way” that both space and atoms are “working hypotheses”; and yet the natural scientists deride this Berkeleianism and follow Haeckel! We are by no means idealists, this is a slander; we are only striving (together with the idealists) to refute the epistemological line of Democritus; we have been striving to do so for more than 2,000 years, but all in vain! And it only remains for our leader Ernst Mach to dedicate his last work, the outcome of his life and philosophy, Knowledge and Error, to Wilhelm Schuppe and to remark ruefully in the text that the majority of natural scientists are materialists and that “we also” sympathise with Haeckel… for his “free-thinking” (S. 14). 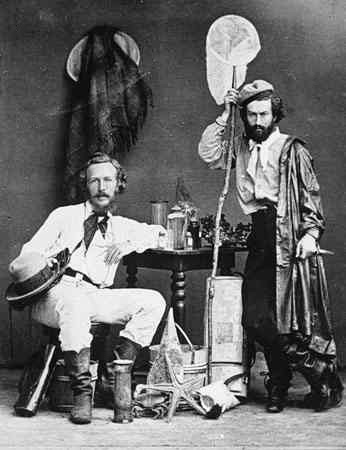 Ernst Haeckel with Nicholai Miklukho-Maklai, his assistant, in the Canary Islands, 1866

And there he completely betrays himself, this ideologist of reactionary philistinism who follows the arch-reactionary Schuppe and “sympathises” with Haeckel’s free-thinking. They are all like this, these humanitarian philistines in Europe, with their freedom-loving sympathies and their ideological (as well as political and economic) captivity to the Wilhelm Schuppes. Non-partisanship in philosophy is only wretchedly masked servility to idealism and fideism.