The Sétif massacre of Muslims by French, May 1945

Or are the lives of some people of greater value than those of others?

‘We walk because freedom of speech will not be suppressed.’ How noble! But this nobility rapidly evaporates upon reflection. To what extent have France and other capitalist nations made a mockery of freedom in the Middle East, amongst Islamic people – in their treachery, their instigation of coups and support for the most brutal dictatorships in the name of power politics, exploitation and greed?

Or is the freedom of some people, the right to live, write and speak as they determine, in comfort, of greater importance than that of others, more often than not, in poverty?

That ‘we’ (i.e. the West) have the freedom to mock Islam is a red herring. The subject is freedom itself.

A practical reason for why their religious structures (for both religion and education) are so important to Islamic people is precisely because capitalist nations have been relentlessly conniving towards and manipulative of Islamic states, to weaken and divide them, preventing their people from making their own political choices – or, with regard to the Palestinians, from even having their state.

It was only after the Bali bombing in 2002 that the Australian government gave millions to Indonesia for school education – motivated not by the wish to propagate freedom but by self-interest, to weaken the religious influence at the madrasas, the only places providing education to the children of those living in poverty.

The mass display over the last few days of self-centred hypocrisy and myopia by the affluent, educated and increasingly insecure French middle class is extremely concerning for the future of global society – this is the obverse of the historically progressive potential of a rising middle class – a potential which is finding expression in China.

The scale of the response and particularly the bizarre political leaders’ walk yesterday were about much more than mourning over the murders of seventeen people, ‘opposition to terrorism’ and ‘standing up for freedom of speech’. They embodied the recognition of and mourning over the decline of what has been taken for granted for so long by Western nations – their global domination – and within those nations, the decline and diminution of their middle classes.

The ‘rise of Islam’ (Islamic people are now fighting back increasingly, and in multiple, unpredictable  ways) is one aspect of this, the quiet rise of China to global domination and of Asia is another. Like the fall of Rome, pressures from ‘outside’ on fragile economies are mounting.

This recognition and mourning was epitomised in the linking of arms by the front row of political leaders in their walk. Europe’s finest, facing backwards into history. I note that the Americans, ever keen to be seen at the front, only sent their ambassador to the leaders’ walk – they knew what it represented and didn’t want to be thought of as identifying too strongly with it.

The murders at the Charlie Hebdo publication, the kosher supermarket and elsewhere brought all this out.

The Sun-Herald 18.01.15 ‘Dr Mohammed (the Grand Mufti of Australia) said in the past (Charlie Hebdo) had been forced to apologise for criticising former French leader Charles de Gaulle and was closed down. He said it had also apologised and axed a cartoonist over an image mocking the son of the former French president Nicolas Sarkozy, which was widely considered anti-Semitic.’

(‘Group calls meeting on Hebdo cover’) ‘Be sure this matter has nothing to do with freedom, but everything to do with repressing the global efforts of Muslims to free themselves from the oppressive yolk of the West’s colonial legacy,” an advertisement says.’

‘It bears recalling a well-publicized case some years ago that showed the limits of even Charlie Hebdo’s free speech. In 2008, the French political cartoonist Siné, an octogenarian anti-capitalist and anarchist who had been contributing to Charlie Hebdo every week for decades, published a cartoon about Nicolas Sarkozy’s son, Jean. Jean Sarkozy was marrying the heiress to the French electronics chain Darty, which is a Jewish family business. In his cartoon, Siné noted—without any evidence to support this—that the young Sarkozy was going to convert to Judaism, the religion of his wife. Siné wrote, “He’ll go a long way in life, this lad!” Charlie Hebdo’s editor at the time, Philippe Val, who had printed the cartoon, faced objection, agreed it was offensive, and asked the artist to apologize. Siné said he would prefer to “cut his own nuts off.” He got axed from the paper. The cartoonist founded his own magazine—Siné Hebdo—took the journalist who first accused him of anti-Semitism to court for slander, and was put on trial himself for charges of anti-Semitism.’ 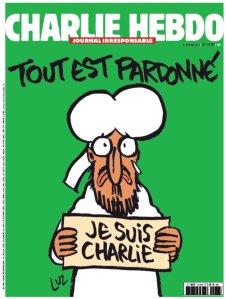 The Sétif massacre of Muslims by French, May 1945