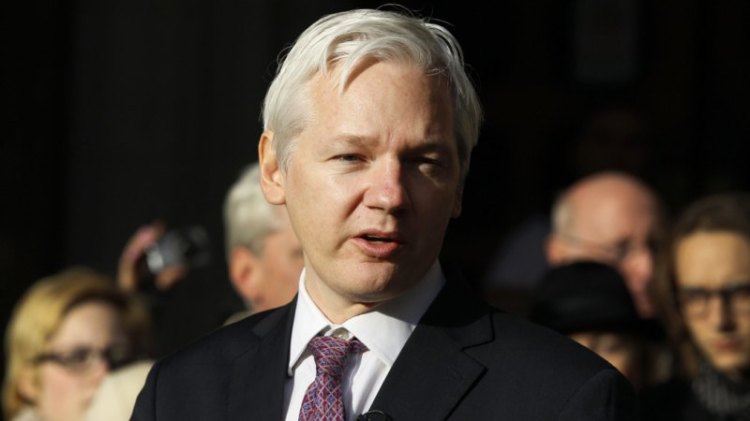 Assange makes a statement outside the High Court in London in February 2016, when he had already spent three years holed up in the Ecuadorian Embassy.

Suelette Dreyfus, ‘EU hails Assange while Australia does nothing’, The Sydney Morning Herald, 18.04.19

The European Parliament passed a law this week to protect whistleblowers across 28 countries, with support from 591 MEPs to just 29 against, while some abstained and some were absent. This new EU “directive” may have been inspired in part by WikiLeaks’ reporting, but it will not help its founder, Julian Assange, who is already sitting in a British high-security prison, Belmarsh, under harsh conditions.

Assange faces a UK charge of skipping bail. He always said he skipped bail because the US government wanted to put him in a US prison. He was correct.

Now the US is attempting to extradite Assange to face criminal proceedings. Its single charge against him is about an event that happened nearly a decade ago – and it is a serious threat to media freedom.

This was the view of many in the meeting rooms at the European Parliament in Strasbourg this week. On Monday night the Parliament’s plenary passed a motion to discuss Assange’s plight. A stream of MEPs from different countries told the chamber of their worry for his safety, proposed giving him asylum in Europe, and insisted he not be extradited to the US.

A few journalists have claimed US criminal proceedings are not a threat to press freedom because “Assange isn’t a journalist”. Why? Because he “just dumped” US military documents, the “War Logs”, in an unredacted form. This is inaccurate.

When WikiLeaks published the Afghanistan War Logs, it withheld more than 15,000 records. Its next major publication, the Iraq War Logs, was more heavily redacted – so much so that other media outlets complained.

Assange is both a journalist and a publisher; he has led fearless news reporting over more than a decade. His digital media outlet has worked like a wire service: it publishes straight, fact-based news pieces, supported by data sets of redacted original material. Media around the globe have taken these news pieces and expanded them by enhancing the stories with local content, as they might with an AP news story.

I previously worked with Assange, writing the book Underground, and other journalism. What I witnessed was an investigative journalist at work. He had a strong news sense, sought to report the facts accurately, was a good writer, and believed in reporting news in the public interest. Since 2007, he has been a member of the journalists’ trade union, the Media, Entertainment and Arts Alliance.

That the EU Parliament is moving to protect whistleblowers, and many of its members are so concerned about Assange, begs the question: why isn’t the Australian government using its special relationship with Britain to ask for its own citizen to be sent safely home? Prime Minister Scott Morrison’s throw-away lines about Assange’s case raises questions about whether he is a leader who will look after Australians in strife overseas. This is one of the roles of a government.

Labor leader Bill Shorten could easily follow the lead of his British Labour counterpart, Jeremy Corbin, who stated he does not think Assange should be extradited to the US. But he hasn’t yet.

The US criminal charge puts at risk the public interest chain of investigative journalism: the information path of whistleblower from journalist to publisher to the public. This chain depends on technology, particularly for security and anonymity protections. An attack on any part of this chain will weaken this corrective mechanism that exposes corruption in our society.

Whether you agree or disagree with Assange, he has transformed journalism, and turned whistleblowing from a corruption issue into a freedom-of-expression issue. If this extradition goes forward, expect the chill of a coming winter in media freedom.