“Gaslighting is ‘a form of domestic violence’ – and children can be victims too”, Anna Kelsey-Sugg, Areej Nur, ABC radio Life Matters, 21.04.19

If reality TV show Married at First Sight taught us anything, it’s what gaslighting can look like.

Even if you don’t know the term, you might have recognised the behaviour.

Take Sam saying to Elizabeth things like, “Why are you so angry?”, “You need to calm down”, and “You’ve lost your mind”, when she wants to know why he’s ignored her calls for a week.

That’s “classic gaslighting”, says Stephanie Sarkis, a US therapist who has authored a book on the topic.

And it can be responsible for more than high-drama television: Dr Sarkis says it’s “emotional abuse” that can develop into physical abuse.

“We do need to take this as seriously as a form of domestic violence,” Dr Sarkis says.

And because gaslighters are “so good at manipulating”, she says anyone can be the victim of one.

Dr Sarkis says parents can gaslight too, creating instability and confusion at home.

‘The goal is to make you question your reality’

‘Gaslighting’ describes a series of manipulative behaviours, and takes its name from Patrick Hamilton’s 1938 play Gas Light, later adapted into a film starring Ingrid Bergman. In it, a husband slowly manipulates his wife into thinking she’s becoming insane. The term has seen a surge in popularity over the past few years.

So what is a gaslighter out to achieve?

“The goal is to make you question your reality and become more dependent on the gaslighter for your wellbeing,” Dr Sarkis says.

“The gaslighter wants to make sure that you don’t make any moves without their OK first and that you give all your attention to them.

“It’s all about power and control.”

Dr Sarkis says there are some clear red flags when it comes to gaslighting behaviour.

A gaslighting partner might hide your belongings, for example, then tell you you’re irresponsible for losing them.

They might cheat, then accuse you of cheating, despite no evidence to suggest it.

They can also isolate you from those closest to you, “so they have you all to themselves”, Dr Sarkis says.

“Particularly, they go after people who are near and dear to you,” she says.

“[They might say] ‘other people think you’re crazy’, pitting people against you, saying that a relative said something that they really didn’t say that was derogatory towards you.”

If it’s very difficult to express criticisms or discuss with a partner what’s not working well in a relationship, that’s another red flag, according to Dr Sarkis.

“If you say, ‘I’d really like to talk to you about something’, the person will disappear on you, or they’ll change the subject or they’ll do anything they can to not talk about their own failings,” she says.

And it’s not just partners who can be gaslighters.

Parents can also target a child with gaslighting behaviour, Dr Sarkis says, which can begin when a child begins to develop an independent spirit or starts to say no to things.

“That’s when the gaslighter starts really letting out their anger,” Dr Sarkis says.

She says gaslighter parents “tend to have a golden child and a scapegoat child, and those roles reverse at will”.

“It gets extremely confusing to kids and there’s no stability in that type of parent-child relationship.”

Gaslighting can also manifest in friendships.

A person who is “pathologically envious” of a friend, for example, might “try to sabotage your relationship with your partner or spouse”, Dr Sarkis says.

They may also try to pit your children, neighbours and other friends against you, she says.

‘The best thing you can do is just go’

If you’ve identified a toxic gaslighter in your life, Dr Sarkis says there are some swift measures you should take.

“First, if you’re concerned about your safety, contact your local resources and domestic violence resources just to make sure that your safety is kept to number one,” she says.

“If you’re in a relationship with [a gaslighter] and you don’t have children, the best thing you can do is just go.”

Next? “Make sure that they don’t have access to you,” Dr Sarkis says.

She recommends blocking the person’s phone numbers and emails, and telling your friends and family not to pass on any messages from that gaslighter.

Dr Sarkis says the gaslighter might try a method called “hoovering” — to try to get back their partner “through any means necessary”.

“Because they need this attention and when they don’t have that attention from you, they will seek it out in pathological means,” she says.

If you have children with the gaslighter, it’s more complicated than just blocking them.

Dr Sarkis recommends creating a detailed parenting plan that establishes boundaries, and includes details such as where and when to exchange children, and what will happen if the other person doesn’t show up.

“You need to have that written out very clearly,” Dr Sarkis says.

And in forming new relationships, Dr Sarkis says we shouldn’t need to keep our guards up, but that it’s a good idea to stay alert to red flags.

“I think we really need to listen to our intuition,” she says.

“We all have a different level of when something feels not right, and I think we really need to listen to that.”

Above all, take ‘mental’ notes and trust your intuition.

Ingrid Bergman in the 1944 film Gaslight.

Several weeks ago there was an article in AppleNews on gaslighting which entirely missed the point of what gaslighting is (like almost all writing on it), discussing it as a general ‘messing with someone’s head’. Gaslighting is much more specific, calculated and vicious than that. And it has a core element not necessary to general ‘mind games’.

Evidence may be produced to support this – e.g. in the excellent 1944 film Gaslight, the husband pointed to the mark on the wall where a picture had been, charging his wife with having moved it (the charge of his victim’s having stolen it is not necessary to the aggressor’s purpose).

The key aspect of gaslighting is that we naturally (i.e. by not taking into account the finer points the current initiated by Plotinus has done so much to explicate) accept physical existence. Physical existence is not up for debate – a thing either is or it isn’t. We take it for granted that there is nothing more certain and real than physical existence. Thus, the stakes are the highest.

The aggressor’s purpose is to aim directly at the qualities of the victim essential to living a healthy life – to destroy not only the victim’s perception of reality and trust in their memory and self but their sense of worth, reducing them to obsessively second-guessing the aggressor and, in effect, to utter psychological vulnerability to and domination by them.

A range of secondary tactics are employed on the victim to achieve this (e.g. shaming and the manipulation of affection). This is the ‘messing with the head’ part.

The film Gaslight correctly made another very important point about gaslighting – that the aggressor’s ultimate purpose in targeting their victim may not concern the victim at all, but be the achievement of another goal – in the film this is the aggressor’s discovery of hidden wealth and keeping that discovery secret. This points to the degree of self-focus of the abuser.

On the healing power of positive reinforcement (also in the film): it only took the (from memory) policeman to confirm to the victim that the gaslight was going up and down, as she saw and knew, for the husband’s web of lies and his power over his wife to crumble and vanish.

A form of intimidation or psychological abuse, sometimes called Ambient Abuse where false information is presented to the victim, making them doubt their own memory, perception and quite often, their sanity. The classic example of gaslighting is to switch something around on someone that you know they’re sure to notice, but then deny knowing anything about it, and to explain that they “must be imagining things” when they challenge these changes. 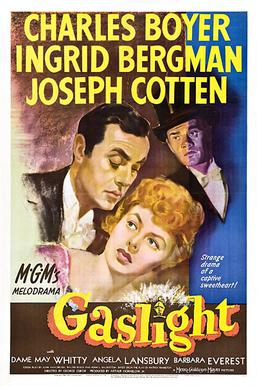 A more psychological definition of gaslighting is “an increasing frequency of systematically withholding factual information from, and/or providing false information to, the victim – having the gradual effect of making them anxious, confused, and less able to trust their own memory and perception.

With Gregory looking on, Paula has discovered the letter from Sergius Bauer.

Your spouse begins telling you things that never really happened. For instance, he says that last week he told you he was going to go to the bar with his buddies this Monday night, but you never remember him telling you that. 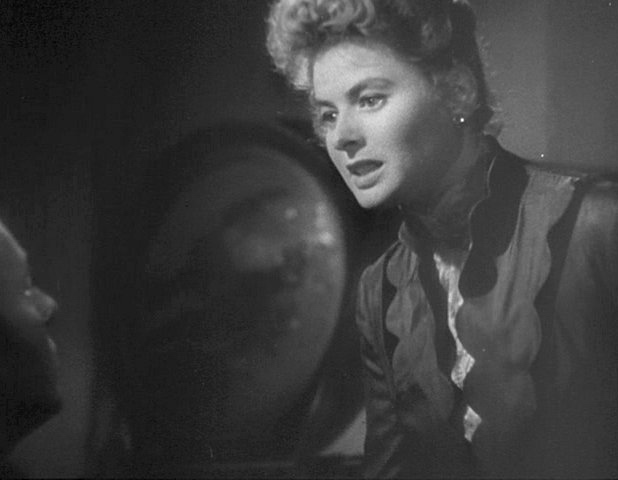 Charles Boyer and Ingrid Bergman in the final confrontation

Or maybe your boss gets angry because you didn’t prepare the report he asked you to. When you remind him that he usually prepares that particular report, he snaps that he told you to take care of it a few days ago because he was too busy. However, you know he never asked you to do so.

Both of these could be considered gaslighting.